Previously I'd mentioned that I was helping my friend, Peg learn to tat. This week something really good happened for me (more on that later), and Peg gave me a congratulations card with some of her tatting on it. I asked permission to show it to you, and she agreed. Although I may have done it anyway if she'd have said no, because I'm very proud of her. 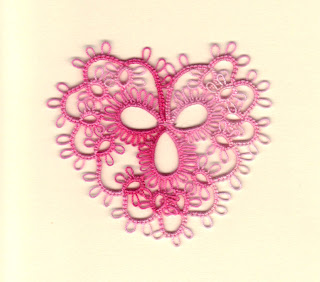 I'm not sure of the pattern, but it is pink on a cream card. I couldn't get the card to scan nicely, so I cropped the heart out of the picture to show you.

A heart made in size 80 thread, are you kidding me, Peg? Size 80! That's awesome. Way to go, Girlfriend, I'm super proud of you.

Have a great day everyone.

P.S.I was folding laundry and thought oh I've got to go back to my poswt and add that to my it, 10 minutes later I have no idea what it was.... hummm.

P.S.S. about a hour later, I remembered. Okay so when I add tatting to the front of a card I sew it on using the same color thread and knot the ends together. Peg sewed hers on but tied it in a bow on the back for easy removal which I think is a great idea so I had to share it.
Posted by Bonnie at 6:21 AM 7 comments: Links to this post