SR and SCMR & There Goes My Tatting Time

I did this post last Sunday but because I had a non-tatting related item in it, I debated over if I should actually post it. Then I decided I was going to revamp it and never did. Since I have a horrible cold and I didn't do much tatting this week, I'm going to post last week's in it's original form. I hope it makes you smile.

It really didn't take me long to figure out the SR (split ring) but it took considerable time to learn the SCMR (self closing mock ring.) What happened was I was trying to actually make a ring rather than have the second shuttle be the core of the SCMR.

Once I realized SCMR isn't a ring but a mock ring it was quite easy. I hope to have it finished in time to post next week.

Non-Tatting related, but a funny story.

My avid body building - every day gym going husband called me at work last week to tell me he got me a present. A present, yeah!, what is it? "A gym membership." How thoughtful! *sigh* Okay so I say "I'm game to a trial membership." To which he replied "I got you a year membership, we have alot to do and a little time to do it in."

(January 2009 we will celebrate our 25th Anni. For almost 2 years now we have been planning a cruise for Jan 09 with our very good friends, Kris and Nicole, who will celebrate their 10th Anni around the same time. )

Isn't he the greatest? Now mind you I was furious at the time, hung up on him in fact, but I know he loves me and since he isn't very romantic, this is his way of saying that he wants me to be healthy and grow old with him.

And I know that I need to do this for myself, so I started a week ago today. 4 times a week, just cardio for now, a hour and a half a day. Today was the first day of week #2, weigh in day, the first day of the new week, I lost 5 lbs! I rush to tell DH "5 lbs!" to which he replys "I told you the first few would come right off, don't get over confident." Feel the love?? :-)

Does anyone know if it's possible to tat while on a treadmill?

True to my word, I worked on a project using my HDT. The pattern is "Celtic Flower" from Celtic Tatting by Rozella F Linden. 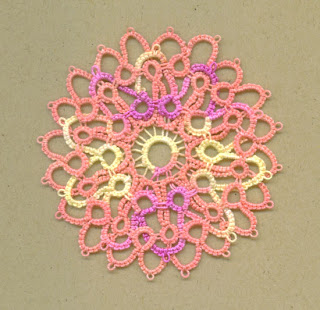 The HDT is from Marilee's "Peace" HDT batch. It is done in size 30. I used a small portion of a skein of "Peace" and since I had to redo the second round (the long peach colored spikes in the middle) I used almost all of a skein of "Peach". Also I didn't leave the beginning picots on round one (the multi color) long enough, which then meant the final rows of that round weren't .......... I guess I'll say .... high enough, so I had to slightly modify the third/final round (the final peach.) I felt the directions were lacking for that final round, I had to untat in order to get the over/under celtic weave working. It didn't explain that in the directions, although it was reflected in the picture, which I missed because I was to busy reading the directions, go figure. LOL. Regardless I think it turned out pretty good.
I feel bad that I missed out on Jane's Tat It And See. I started it but got worried when I came to the first split ring (SR). I know what a SR is but haven't practiced it enough to put it into a project. I didn't want to start off with messing up the project right off the bat. So this week I am going to spend practicing the SR and the SCMR (self closing mock ring.) I hope to have that down by the end of the week. I'm sure the Tat It And See was alot of work, but I hope Jane does another one. It looks like everyone had alot of fun and I'd like to be in on it. As your aware I haven't been tatting long, but I can already tell how much time Jane spends helping out the tatting world, just check out her pattern page. Thank you, Jane.
Please allow me to say unless something wonderful happens in my tatting world during the week, I am only going to update my blog on the weekends.
Happy Tatting,
Bonnie
Posted by Bonnie at 5:14 PM 7 comments: