I enjoy creating. I love tatting, but greatly enjoy working with paper, stamps & inks, fabric, yarn, you name it I enjoy it.
I participate in a swapping society called Swap-Bot and occasionally I find fun groups to be a part of, the latest one is call "Instant Books". Here is what I made 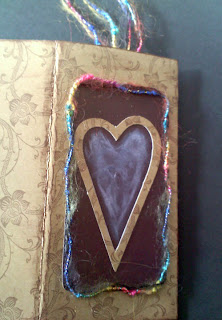 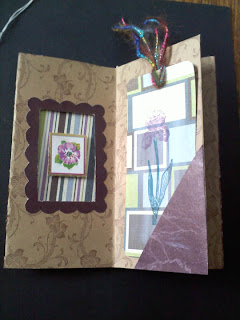 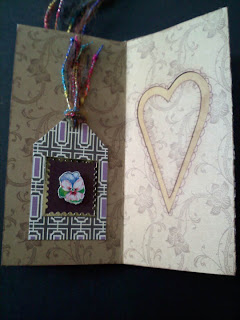 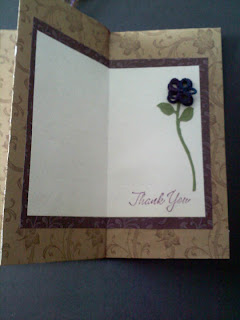 Notice the flower here. I used green paper to made a stem, then tatted a series of rings gradually adding more ds-s to make bigger petals, and form a flower. 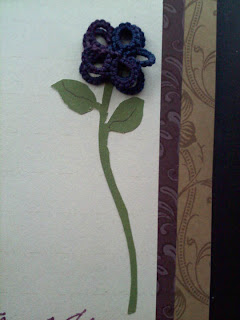 I have learned that some people there don't understand or appreciate tatting. I was in a swap called "Surprise your partner with 1 of your crafts" Here was my rating "it met requirements I guess and is cute... however I don't think I'd enter a swap like this again... to broad of a spectrum and I am left feeling slightly deflated."

I myself was deflated with that rating. It's hard to put so much into a tatted piece and not have the receiver realize how much work it is.

I know that most of you are enjoying your Lizabeth thread from Handy Hands. In fact some of the HDT artists are using it to dye the threads I so greatly enjoy.

I am not however having a good time with it. Previously I blogged about finding it at JoAnn's Fabrics and the problems I was having. Well it's not getting any better with the thread I purchased directly from HH. This what I found about a fourth of the way thru a ball of white. 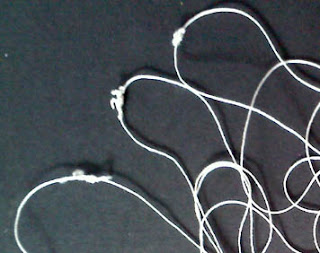 It was found as I was winding the second shuttle for The Little Girls' Christmas Barrettes. Thank goodness *this time* it wasn't in the middle of a project.

I prefer 6 cord thread, and in solids I guess this is the best I can get here, so I will still use it.

I continue to "Tat On" dispite the disappointment.

I Am Not A Designer!

I learned something, I am not a designer.

I wanted to tat something special for my 2 little nieces. They are to young to understand what tatting is, but not to young to know they enjoy bling. :-)

I wanted to make them something for them to wear in their hair. My first idea failed miserably, I don't even have it to show you. But I realized that I couldn't do hair bands, so I went to barrettes instead.

I had a hard time finding something that work with their thin hair and would showcase the tatting more than the barrette.

The one in the far top left is my first try. I felt the hole in the middle was to big. Then I decided, I could tat it a bit differently and cover the hole with something cute in the middle, which is on the top right. At that point I talked to my sister, and she'd had special Christmas shirts made for them in red and green, so I decided to go with those colors, which is lower left. However I didn't feel like it was very blingy. I took it to work and ask my friends, they agreed, so back to the original with the ribbon and rosette. So I had to figure out how to connect them to the barrette, so I made another one, the lower right, in blue so I could test how to put it on. It didn't turn out to good, because I didn't take into account how it closes as you can see in the next photo. 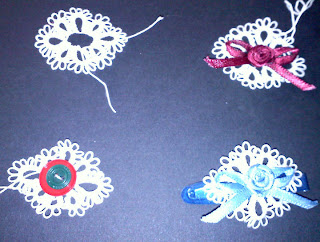 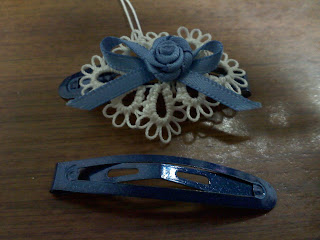 I finally got the hang of it, and was able to finish them in time for Christmas day. 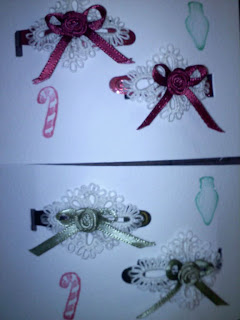 According to my sister, most days they are what The Little Girls pick to wear in their hair. Hummm I wonder if I still have my final chicken scratch notes in order to make a couple more sets.

I started this post by saying, I am not a designer, however they did turn out pretty cute, so maybe what I should have said is ......... I am not a pattern writer.

To all Tatting Pattern Designers/Writers : Thank you for the work you do.

In mid-December I blogged about the shuttles I blinged out to exchange with Wendy at Umintsura. Even though the pink one's tip wasn't very useful I sent it anyway.

Earlier this week, Wendy blogged about the shuttles she received from me and showed what was on the back of the blue one......If you want to see you'll have to go to her site to check it out :-)

Well yesterday I received mine in the mail from her. Look at this lovely red envelope it was wrapped in. Some how I'm sure I can recycle that into something. 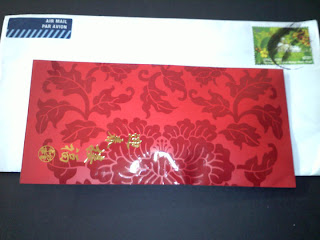 Thank you, Wendy.
As usual the pictures are taken with my cellphone camera.

I could get into this blinging and exchanging of shuttles. Anyone game?