A couple of months ago, well on International Tatting Day April 1st to be exact, Fox got some of us tatters excited about a book that she's willing to share with us. I for one am excited to say that at some point I will be able to get my grubby little tatting hands on it. Three lucky tatters have gotten their chances with the book so far, and including Fox where it started, it has already traveled to 4 countries. Click on the icon above to learn how to get your hands on it.

On my last post, Isdihara's wrote that her word verification was TATON, it really tickled my fancy and has become my new phrase, like "rock on".

It's become my way of expressing when I think something is cool or neat, or when I show surprise like "oh my goodness", sometimes I even use it to say good bye.

When I hear "Tatting rules the world!!", I think of Jane. Maybe when people hear Tat On they will think of me, so with help from Isdihara I leave you with .....

I would like to share with you what I tatted for a dear friend who is turning 60 this week. 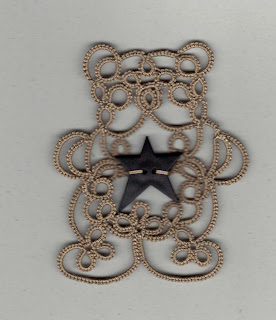 It is Eliz Davis' Teddy Bear, the pattern can be found here. I was surprised to find that I had the rocking horse button that is in the photo on the pattern, so I was able to gage about how much space would be in the tummy area in order to add a button to that section. I wish I had picked a different one though, it seems to big, or maybe it's just to dark/drab of a color against a tan thread. I'm all about color so that maybe what it is. (That seems to translate into I need to make another one.)

It did give me some problems though. The first time I completed the head section and realized I needed to tat it tighter. The second time, I had to retro tat a couple of times, first I had problems with the nose section and then written directions missed a join, but over all it was another one that was fun to watch come to life.

Since I am writing this on Sunday, and post dating it until Tuesday which is my friend's bday, I still have it with me, so I will measure it. In size 20 Lizabeth thread, it is 3" arm to arm and just a bit over 3.5" from tip of ear to bottom of foot. I am not as good as Tatskool who kindly gives us thread amounts used (which I really appreciate), but I can tell you both of my clover shuttles were filled and I ended up with very little left on either of them.

I was pleased when I showed it to DD and she knew right away it was a teddy bear. I'll attach it to a blank card. (I wonder if I should make some balloons for it to be holding, that would add some color............ hummm.)

I ran behind on getting my Mother's Day card mailed to my Mother,
so can I use that as my excuse for not having tatting to show you today.
(I gift away my work so quickly that most of the time it is given away,
and I don't think to scan it or take pictures before hand.
Although sometimes it's the same motif over and over for weeks or even months
and what good is that to share multiple times, that's a topic for another post)
Anyway............. Instead I will show you the beautiful flowers I received for Mother's day. 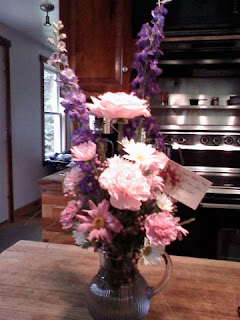 They arrived at work on Thursday, so I was able to enjoy them there for a few days before I brought them home for the weekend. They smell so lovely.

Note the single pink rose in the middle. When it first arrived it was a rose bud, and now it has opened up and is just beautiful. I believe it represents my only child, our Daughter. 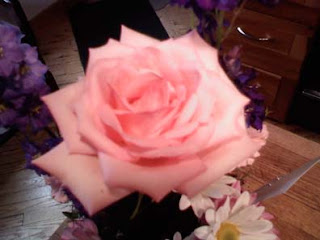 I also say I recieved a lovely orchid, and some other gifts.
Auh it's good to be me. :-)
To All Mothers:
Happy Mother's Day!
I hope today you are surrounded by the love of your family.
Posted by Bonnie at 10:31 AM No comments:

No need to read, written as a form of self relief.

Our daughter lives in a town just over a hour away. Sometimes she comes to stay with us for a few days at a time. This weekend is one of those times. Just having her around is a great Mother's Day present. But that isn't the reason why I am telling you this......... the reason is I have to get it off my chest it is weighing to heavy on me and just being able to say it will help me.
Last night DH was at work and DD was out with friends. I sent her a text asking when she'd be home, she indicated it was shortly, so I decided to wait up for her.

She was home shortly before midnight. I heard her come in, the girls barked for a second recognized her so they stopped. I called to her from the tv room, and she greeted me back. I heard her dig thru her laundry basket then go down stairs to change. Moments later, no less than 3 minutes from the time she first got home, I heard the door open and the girls started to freak again, I assumed DD had forgotten something in her car, but the girls wouldn't stop barking. I called to DD, but I didn't expect a response because I'd heard the door open but I also thought I heard her go downstairs. She replied that she was downstairs changing, then I heard the door close. We both rushed to the kitchen but no one was there. (we live in the countryish, meaning we do not live in a town setting, we are rural but our neighbors are still close) There were no cars in our driveway and we didn't see anyone leaving. We turned on all of the light and locked all of the doors and windows. I called DH at work and on his way home to check on us, he was stopped by the police for speeding, so he explained and the officer called it in. DD and I went to watch tv together to get over the jitters, and heard a knock at the door, both of us basically freaked out more. But it was the police, at least 4 or 5 police cars, followed by DH.

The area was checked, but nothing was found. All 3 of us had to provide our full names, DOB, phone #s, etc, there will be a report. :-(

Both DD and I know someone at least opened the door to our home. Even though our girls were not happy the person remained for awhile, a minute or so, seemed like forever but maybe was less. DH's cellphone (he can't have it at work), his ipod, and our checkbook were right there on the counter, they were not taken.

I am so shaken up. In nearly 20 years of living here I've never felt violated, ever. I'm so thankful that DD was with me this weekend, not to mention was already home safe, and that between the girls putting up such a ruckus, as well as DD and I calling to each other, the intruder left.

Even though the girls were snuggled in tight with me and DD was sleeping dowstairs with the tv on, I hardly slept. I didn't know our house had so many night time noises.

When I was a young preteen I had issues, but it has not affected my life, I am not scared. I have a loving family and am very active in the community, I love life and am not afraid. I leave for work in the dark and DH works odd shifts, never have I felt afraid in my own home. I'm praying that GOD will help me to not let this change me.

Pharmd2009, please do not tell M&D about this. This post is for no one other than me, just to try to give myself a release, I do not want them to know.
Posted by Bonnie at 8:02 AM 1 comment: