Early this year Jane did a TIAS ("tat it and see"... the pattern is dished out pieces at a time and you tat it as the pieces come out not knowing what it is until the end), which I started but life got busy so I didn't take the time to finish it. What it ended up being was a hippopotamus. I'm not sure who it was but someone in our tatting world had mentioned the hippo in relationship to the song "I want a hippopotamus for Christmas, only a hippopotamus will do........" etc. I thought that was a hillarious idea.

I make my Christmas cards every year and last year I made them all as fabric postcards, each one being different. (I've been kicking myself ever since because I didn't take a photo of one of them!)

Earlier in the year, when I went on a business trip one of the ladies asked me if I was going to do fabric postcards this year for our Christmas card. I laughed and said no way, never again, it was WAY to much work. Then I told her about the hippopotamus and his Christmas song, but that it would be even more work to make 35 of them, so it was unrealistic. Gary, the only male in our group that trip, instantly started harrassing me about hippos and it's been an on going thing all year long. When we went on our trip in September I'd printed out the words and lovingly sang him the whole song ( he was in a confinded space and couldn't get away but still........ LOL ). Another trip he was pretty sick so I found a very small hippo to "cheer" him up with.

As you can see it's an ongoing joke for us.

Here's where the tatting comes in.

I've been working on tatting Jane's hippo for a week or so now. And I completed it on Tuesday. Last night I put the finishing touches on making it into a fabric post card. It is going to go out to my friend, Gary today. (I do hope that the Christmas Hippo song gets stuck in his head like the Disney World's "It's A Small World" song is.... insert evil laugh.) 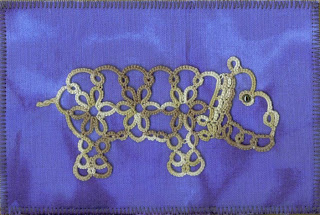 I almost forgot he is tatted in Sherry's size 20 Coffee and Cream.

I did have a blast making him and I know that Gary is going to laugh for many days over this. So it was worth all the time it took. But honestly I had so much fun that I have to make another one and send it to our daughter, Holly, she will get a big kick out of it too.

In September and October Aileen blogged about one of her favorite bookmark patterns. It is Tabatha by Kersti Anear. Unfortunately this pattern isn't available on Kersti's new website so Aileen emailed me a copy of it. (Thank you, Aileen and Kersti.) I thought I'd give it a try as the 2nd bookmark for the Winter 2008 Tatting Round Robin Bookmark Exchange.

I did fine on the first half but part way thru the second half I realized I had been making mistakes since I started that half. With it being size 80 thread there were only 2 things I could do, leave it (never, it would have drove me crazy to send it out that way) or cut it out and restart that whole side, which I did. Thankfully I was able to do it without any disasters.
Here is Kersti's Tabatha bookmark in DMC size 80 red thread. It is going to my second round robin partner, Cathy. Because of the redo I am not going to meet the deadline of mailing it today, as I want to make one of the flower paperclips to send also.

Sorry I couldn't get a the bookmark to lay straighter, I tried twice and although it is my error of placement on the scanner, it is really resisting doing it's job any more. So this is what I am stuck with.
Thankfully the #3 bookmark for this challenge was the first one I completed, so it's done and ready to meet the mailing deadline.
When I made the error on the bookmark I had to give myself a break from size 80 thread for awhile, so I worked on Mike's snowflake. (Thank you, Mike!) 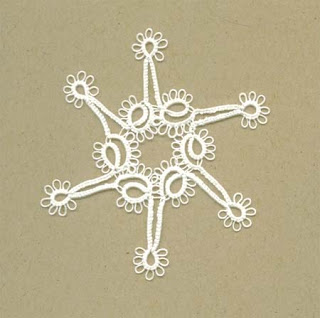 It is far from perfect but is was a fun pattern to do. I've only stiffened one tatted piece in the past, however I am going to try to do this one. I've got something called Aleene's Fabric Stiffener. It was the only thing I could find in my small town. Is anyone willing to give me suggestions on what works for you? And is there a good way to apply this? I assume put it on a paper towel and spray away.....?
Posted by Bonnie at 5:39 AM 6 comments:

A quick update on our Friend's health. After many tests and 2 visits, she is doing well. Because of the lymp nodes that were taken out the remaining ones have had to reroute themselves. In the process one of them burst. That was what the intense pain was. Her dr said it was a rare thing to happen and the chance of it happening again are slim. There is nothing she can do to prevent it or to make the possibilities of it happening again greater. A fluke basically.

She looks great, way to thin in my unasked for opinion, but great, her beautiful self. She says she is feeling much better and in fact has returned to work.

Thank you to everyone who kept her, her family and us as her friends in your thoughts and prayers!

Now back to our Christmas cards.