Thank you to everyone who commented on my give away blog post!

Here are your random numbers:

My Turn For A Give Away

If I have done this correctly when you see this post I should be enjoying a life of luxury somewhere on a ship in the Carribean. So to celebrate I'm having a give away.


Want to see what the give away is .............. it's a fabric postcard, made by me.  It shows some of my favorite things about Spring, the Sun to represent warmth & more daylight.  Flowers, Grass, Butterflies, and a Dragonfly to represent the beauty of spring.  And a Bee thrown in for good measure, but mostly because our daughter hates them, so it was fun to add. 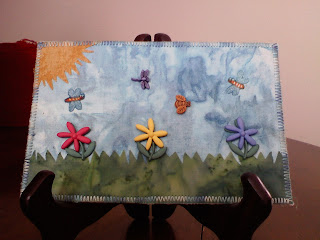 To enter leave a comment on this post and when I return to the land of lake effect snow on January 19th I will use the random number thingy to determine who the winner will be.  If you do not have a blog please be sure to leave a way for me to contact you in case you are the winner.

Other than a few times, I try not to blog about the non tatting parts of my life here.  I think people who visit this blog are here to see tatting.  However today this post will be used as an outlet for me.  Here's my story.... after 2 days of travel we have arrived in Austin, TX.  We left our home, the land of lake effect snow, on Friday at 3 PM and drove to Buffalo NY, it was snowing no big deal, it's western NY it's snows for months at a time there, the airport can handle this, no problem, right?! ......... went to check in at airline and the machine told us to see a representative, we did, no problem.  Security checkpoint, no problem.  Went to terminal, problem!  It was about 5 PM at that point, our flight was scheduled for 6:25, the rep who checked us in didn't tell us that Atlanta Georgia was having freezing rain issues and the incoming aircraft, which was also our outgoing aircraft, couldn't leave there.  These things happen, that's why we left home 2 days before the ship sails, it'll be okay, we waited,and waited,and waited, and left Buffalo after 9.  Needless to say when we got to Atlanta we had missed our 9:55 connecting flight.  We stayed the night in a hotel there, and after roughly 4 hours of sleep (rough being the key word), showered, put back on our dirty clothes, and headed back to the airport.  Thankfully the flight was non eventful and we arrived safely in Austin at 10 AM on Saturday, on a plane that was less than half occupied ....... However, our new luggage did not arrive safely.  But it will still be okay, right........ no not quite yet.  I then made a missing luggage report.  And it was located in Atlanta.  Seems that the 8 hours it was there wasn't long enough for them to get it to our aircraft.  Okay okay we can deal with this .............. Me "We need it for our cruise tomorrow morning."  Airline Rep "Should be on the next flight, IF there is room after that flight's passenger's luggage gets on, they take priority." ........ the flight we were on should have had more than enough room for it originally since there was hardly no one on it.  Okay so.....  they will bring the luggage to the home after it arrives.  I went thru all of that and then found out that it will come to the home within 12 hours of arriving in Austin, but they can't promise when it'll get to Ausint. It goes to an outside agency who takes it to a warehouse, sorts it into areas to be delivered to, then sends it out.  No way, can't chance it, we'll come get it then.   I stressed for hours because the flight it maybe on was 3 hours late in arriving to Austin.  Then we were told we couldn't pick it up right away because it would take at least a hour for it to be located and delivered to the airline's office.  After hours and hours of worrying, my husband went to pick up the luggage.  Nice it was home, we have clothes for the cruise!, all is well, right? ........ I opened it only to find that some how (I expect tampering!), the security locks (TSA approved) on both pieces had been broken off (there is no note on or in the luggage saying that it was opened for inspection).  Was it opened in the hours and hours it temporarily lived in Atlanta, or was it at the Austin airport while it was waiting outside their office to be picked up ........  we will never know. I didn't have the heart to go thru it all to see if anything is missing (there was nothing of any value to anyone else, just clothes and heath care items, everything else was in our carry ones).  So now our new luggage, both pieces, are slightly damaged.  Not beyond use of course, just sad that our new luggage is messed up after just one use.  I couldn't deal with life at that point and went to bed.  After a few hours of sleep I woke up at 3 AM and at 5 AM have now prepared for the day.  I am enjoying my morning coffee and have come to the understanding that today, after traveling about 4 hours by car, we will get on a cruise ship and have the time of our lives with no worries for the next 7 days, our vacation will get better .... right?!?!
Posted by Bonnie at 7:05 AM 6 comments: 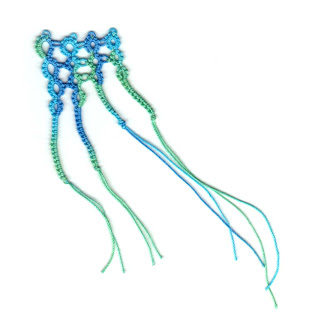 Because I leave today, Jane shared the link for day 3 & 4 with me, then a friend from work printed them and put them in sealed envelopes for me to do while I am gone, I won't have any way to post them until I return from the cruise though.

Today is the day we leave for my Texas to start the first phase of our trip with my Sister In Law and her husband, Susie & Mitchell.  I didn't sleep well last night, to excited.  Today I entered a 12 day worry free zone.  My father in law is coming to live with "the girls", our dogs, while we are gone, so no worries on the home front.  And tomorrow I start phase 2 of the no worry zone, for 10 days I will be not have to deal with snow!   Life is Good  :-)

Happy TIAS!  See you in a few weeks.

TIAS is where the creator of a pattern dishes it out to us tatting groupies in pieces over a period of days.  Then we all tat it together and watch everyone's progress on the TIAS progress page. 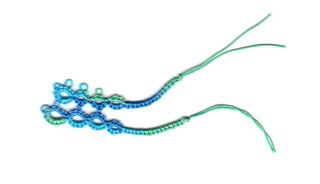 I will be out of the internet area for awhile, but Jane has kindly given me the links to the next few days.  I am going to ask a friend to print them for me tomorrow, put them in individual envelopes and lable them for me so I can open them while I am away.  I don't miss out on all of the fun and I don't want to get to far behind.

I will check with everyone when I return.  Happy TIAS-ing everyone!

Krystle asked if my friend Mark used resin to make the Rosette paperweight, I believe he did, but I'm not sure.  He told me he poured it in layers; when the first layer hardened he put the rosette in then put the next layer on so that the motif would be suspended in the paperweight.  To anyone who is thinking of doing this I should tell you that the thread is more vibrant then when I gave it to him.  I believe that is because it gets "wet and doesn't dry out".  Of course not that it matters, in this case it complimented the motif, but just an fyi.  (I wish I knew how to do this paperweight thing myself because I think it's a great way to display tatting.)  Anyway I think Mark did a fabulous job, **note that he make sure the "right side" was facing up and that each little picot was flat.  I think my friend Rose really liked it because she said "it's not staying at work, it's going home to be displayed".  Thanks for asking, Krystle.


Also Tatskool asked what the name of the book I found the Daisy Heart pattern in.  Sorry, why didn't I think to include that information in the original post?!  It is called Aunt Ellen's Treasury - Tatting Patterns - By The Staff of The Workbasket Magazine.  I didn't connect the pattern to the missing February '88 Workbasket but when I checked the name it maked sense, "the staff of the workbasket magazine", no wonder!

Do you remember last Christmas when I told you about my friend, Gary, and how I tatted him Jane's Hippopotamus, then used it to make him a special fabric Christmas card? (Jane has the pattern under animals, but I wonder if it should go under celebration patterns also LOL!) Gary and I had alot of fun with it and it became one of my favorite memories from Christmas '08. .............. However now the joke is on me because people get me hippo stuff whenever they see it, hippo plate, a hippo chip clip ........ well you get the idea, it goes on and on.

For Christmas '09 one of my favorite memories is what my friend Rose and her husband Jim gifted to me. It's a ...... wait for it .......... auh you guessed it, it's an I Want a Hippopotamus for Christmas ornament. 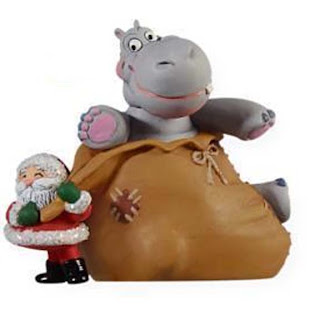 I've got to tell you that there is a button on Santa's gift bag and when EVERYONE presses it it plays I Want A Hippopotamus for Christmas.

It'll stay out with my mini collection to be enjoyed all year round. (Does anyone know how long the battery in an ornament last ....... *sigh*)

As you are aware my Great Uncle Francis, the person who inspired me to tat, passed away this year. So when I sent Great Aunt Myrtle's Christmas card

I wanted to send her something extra special........

Marilee, Yarnplayer, shared her "Remembrance" pattern with us. The pun of the whole string around your finger made me laugh out loud when I first saw it. I HAD to make it for Aunt Myrtle. It is made using Sherry, LadyShuttleMaker's size 20 HDT ..... I'm pretty sure it's Peach Pandorea.

I also sent her this motif, called Daisy Heart. 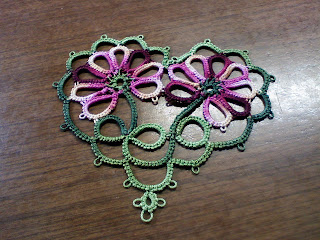 It is made using YarnPlayer's size 30 HDT Roses and Leafy.

I'd seen this motif when I first started tatting, but had a hard time finding the pattern. According to what I'd written down it was in a Workbasket dated February 1988. I must have every Workbasket they made except for February 1988. However about a month ago I was looking thru my other pattern books and found the pattern!

VicTats asked about our favorite Christmas tatting patterns, although this isn't a Christmas item, it has become my favorite to tat over the last few weeks.

I fell on Monday and cut the palm and finger tip of my hand pretty good, I'm praying it will heal enough before we leave for the cruise next week so I can tat on the plane ..... and well I'm enjoying a life of leisure :-)

My goal for the year is to remember to take pictures of my tatting to show you before I give it away.

My New Year's wish to you is for a