It's been 2 months since I've had anything to show. I had to take a leave of absence from tatting to work on a volunteer project. When I was able to return, sadly I found it was difficult to get my tatting flow back.

I started with a project that was clearly beyond my level of knowledge, so after 3 failed attempts, I put it aside until I can research the techniques a bit more. Next came Ellen's paperclips. Her designs are always fun for me and they are fast and easy. Which means I can make alot of them in a bit of time here and there so I usually have something tatted to gave away. I give them away so quickly that I forget to blog about them.

From the paperclips I went to the maple leaf pattern which was a big hit in our tatting community a few weeks ago. After a failed attempt (I made an error at the beginning and noticed it towards the middle, so there was no point to finishing it, LOL), I started over. This is the result. 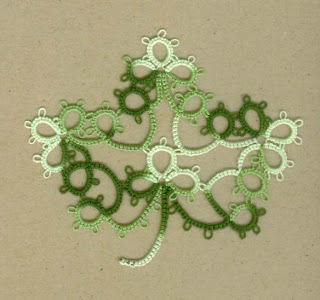 It is made using a size 30 thread, variegated, DMC I think. Previously I had decided that I was going to get into the habit of front side/back side tatting. I am happy that it is now second nature for me and I was able to do it on this leaf without thinking about it twice.

That's all I've got for now.