... no not Men, but tatted Butterflies.

When Isdihara wrote this post that in part featured Jane Eborall's Very Small Butterfly, I knew it was a pattern I could memorize and be able to use when there's just that little bit of thread left on a shuttle that I can't bear to waste.  (bear - no pun intended... sorry that made me giggle)

﻿
﻿
Matilda and I got busy emptying shuttles making Jane's butterflies.  My original intention was to get pictures with Matilda and the people we give the butterflies to, but I get excited to share them and I forget to take pictures.  So rather than stress about not doing it, we decided to just show you some of the ones we had before we gave these ones away too. 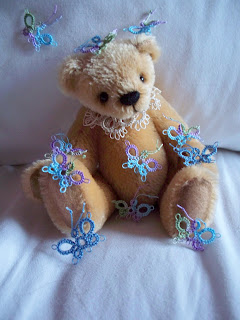 I get to count these towards The 2012 UIU Project, because I was able to empty 2 shuttles making these.

Oh and to explain today's post title:
Matilda said these pictures make it look like it's raining butterflies on her, which she's right .... but when she said that it made me think of the song ....  It's Raining Men.  (Which again gave me a giggle.)
Posted by Bonnie at 10:45 AM

Those butterflies look adorable - and love the color! I was at a sewing expo for a few minutes last week and a overheard a woman showing something to a vendor. I peeked around and it was some tatting she had done - explaining about it because it was something they knew nothing about. I so wanted to go over and have a close up look but I didn't want to appear as nosey as I wanted to be!

Flitting away now and hoping you have a grand afternoon!
~ginger

This is a sweet photo of cute Matilda and her butterfly friends!l

Sweet picture yes you could say raining butterflies, only here it's raining water. Well done on your butterflies they are beautiful colour
Margaret